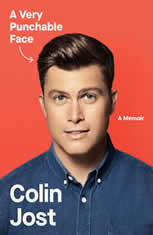 A Very Punchable Face: A Memoir – Audiobook Download – $10
from: AudiobooksNow

In these hilarious essays, the Saturday Night Live head writer and Weekend Update co-anchor learns how to take a beating.

“I always wanted to punch his face before I read this book. Now I just want to kick him in the balls.”—Larry David

If there’s one trait that makes someone well suited to comedy, it’s being able to take a punch—metaphorically and, occasionally, physically.

From growing up in a family of firefighters on Staten Island to commuting three hours a day to high school and “seeing the sights” (like watching a Russian woman throw a stroller off the back of a ferry), to attending Harvard while Facebook was created, Jost shares how he has navigated the world like a slightly smarter Forrest Gump.

You’ll also discover things about Jost that will surprise and confuse you, like how Jimmy Buffett saved his life, how Czech teenagers attacked him with potato salad, how an insect laid eggs inside his legs, and how he competed in a twenty-five-man match at WrestleMania (and almost won). You’ll go behind the scenes at SNL (where he’s written some of the most memorable sketches and characters of the past fifteen years) and Weekend Update (where he’s forced by Michael Che to tell racist jokes). And you’ll experience the life of a touring stand-up comedian—from performing in rural college cafeterias at noon to opening for Dave Chappelle at Radio City Music Hall.

For every accomplishment (hosting the Emmys), there is a setback (hosting the Emmys). And for every absurd moment (watching paramedics give CPR to a raccoon), there is an honest, emotional one (recounting his mother’s experience on the scene of the Twin Towers’ collapse on 9/11). Told with a healthy dose of self-deprecation, A Very Punchable Face reveals the brilliant mind behind some of the dumbest sketches on television, and lays bare the heart and humor of a hardworking guy—with a face you can’t help but want to punch.

Scarlett Johansson talks about showing her film Home Alone 3 to her daughter and getting married to Colin Jost during the pandemic. Late Night with Seth ...

When Fighting Is Your Relationship’s Default Setting - Colin Jost

Colin Jost offers up some financial advice, gushes over low-rent university ads and remembers a relationship in which he constantly fought with his girlfriend.

apple (2) AudioBooks (4) Autobiography (2) Business (2) Clothes (1) Computers (1) Culture (1) Exercise (1) Fashion (1) Future (1) game code key (5) Gear (1) Gym (1) Hoodies (1) Long Sleeves (1) Mens Clothing (1) Money (2) Music (1) Self Empowerment (1) Social Media Marketing (5) Stlye (1) T-shirts (1) Technology (1) Wealth (2) Womens Clothing (1) Workouts (1) Yoga (1)
We use cookies on our website to give you the most relevant experience by remembering your preferences and repeat visits. By clicking “Accept All”, you consent to the use of ALL the cookies. However, you may visit "Cookie Settings" to provide a controlled consent.
Cookie SettingsAccept All
Manage consent

This website uses cookies to improve your experience while you navigate through the website. Out of these, the cookies that are categorized as necessary are stored on your browser as they are essential for the working of basic functionalities of the website. We also use third-party cookies that help us analyze and understand how you use this website. These cookies will be stored in your browser only with your consent. You also have the option to opt-out of these cookies. But opting out of some of these cookies may affect your browsing experience.
Necessary Always Enabled

Performance cookies are used to understand and analyze the key performance indexes of the website which helps in delivering a better user experience for the visitors.

Analytical cookies are used to understand how visitors interact with the website. These cookies help provide information on metrics the number of visitors, bounce rate, traffic source, etc.

Advertisement cookies are used to provide visitors with relevant ads and marketing campaigns. These cookies track visitors across websites and collect information to provide customized ads.

Other uncategorized cookies are those that are being analyzed and have not been classified into a category as yet.